We had an excellent Fairtrade Fortnight in Winchester in 2012 with two major events as well as a number of smaller events throughout the city. It all started a couple of days before the fortnight began with pupils from St Peter’s School going to meet the Mayor, Councillor Barry Lipscombe, in Abbey House for a ‘Big Brew’ event. Then for the first our banner was strung across the High Street and throughout the fortnight the café at the United Church was serving homemade cakes for which Fairtrade ingredients had been used. 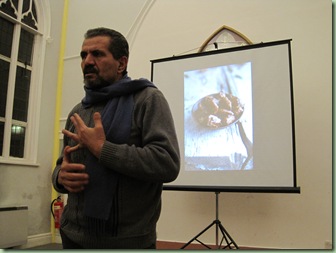 The first major event on 2 March was a great success, producing a lot of discussion. Taysir Arbassi, director of Zaytoun, and Riziq Abu Nasser, an olive farmer, came to the Milner Hall to give a talk Palestine – a story of Fair Trade under Occupation in which they told of the difficulties of producing olive oil in Palestine and the problems associated with exporting it. 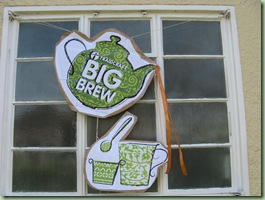 On the following day a ‘Big Brew’ event was held in St Mark’s Church, Oliver’s Battery, which was very well attended and raised over £200 for Traidcraft Exchange.

The main event of the fortnight was a double bill. It started with Helen Carter, Regional Board member of the Co-operative, giving an excellent talk on Co-operatives and Fairtrade – a perfect blend.

The talk was followed by a well attended gala dinner organised by students at the University of Winchester at which £450 was raised for Oxfam Unwrapped and the Fairtrade Innovation Fund.

The dinner was sponsored by a number of organisations.