Palestine – a story of Fair Trade under Occupation 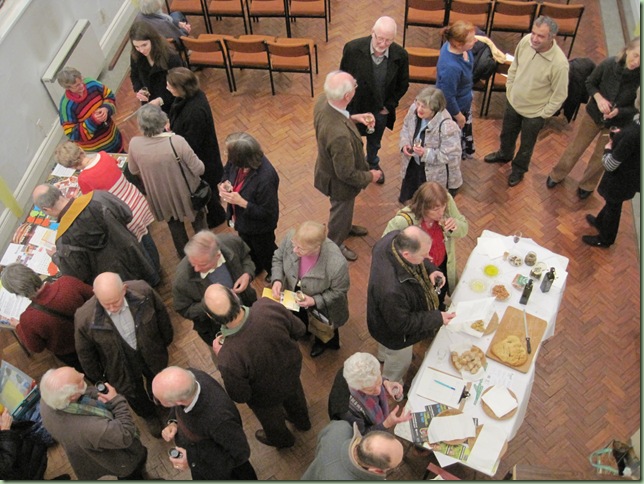 It was a privilege to be visited during Fairtrade Fortnight 2012 by two representatives of Zaytoun, a UK-based body working with over 50 farmers’ co-operatives in the West Bank in Palestine. Taysir Arbassi is the Director of Zaytoun in Palestine, and Riziq abu Nasser an olive farmer in the village of Deir Istyn, with 90 olive trees, some over 2,000 years old. The well-attended meeting, at the Milner Hall, was hosted by the St Peter’s Justice and Peace Group.

The brief olive season is critical to the farmers, providing their resources for the whole year. Until the early 2000s they had no problem in marketing and selling their products, particularly in the Gaza strip and the Gulf states. These areas are now closed to their products and they have faced considerable problems even in marketing more locally. Zaytoun was set up in 2004 in co-operation with British sympathisers and has successfully opened the UK market to their olive oil and other products. This involved the farmers in various changes in their production methods to meet European requirements, and this was facilitated by the forming of collective co-operatives; they also gained Fairtrade status. The initial cost to the farmers was more than compensated by a rise in the price they received from £1 to £7 per kilo, and having a more secure outlet, and they have also benefitted from the Fairtrade premium.

But the olive farmers still face many problems. An illegal Israeli settlement has been built close to Riziq’s village and sewage from the settlement runs through their olive fields, maiming and killing trees. Although new farming techniques enable olive trees to grow at a much faster rate than previously, new trees take at least 15 years to become economically effective. New roads carrying fast cars run through farms and villages with no provision for safe crossing by farmers going to their fields, and there have been many fatalities. Large areas of Palestine have been cleared of olive trees on grounds of security; 2 million trees have been uprooted since 1978. Many problems are still put in the way of the transport of the products; all must go through Israel, and there are numerous stops and check, so that travel to the port takes 15 days rather than two.

Several Zaytoun products (including olive oil, olives, couscous and dates) can be purchased in Winchester’s Fairtrade shop Fuzzi’s in Parchment Street. The oil is also sold at the Badger Farm Sainsbury’s, and can be ordered from Traidcraft, or from local churches running Fairtrade stalls. Buying these products is the most effective way of helping these farmers, contributing to strengthen their economy and to build their self-respect.