Traidcraft and the Supermarket Watchdog

One of our members attended a Traidcraft Campaigning Day in London on 4 February 2012. Many examples of successful campaigning on Fairtrade issues were cited, making us realise how effective our actions can be. For this Fairtrade Fortnight Traidcraft want to concentrate campaigning efforts on the need for a Supermarkets Watchdog.

Nearly four years ago the Competitions Commission found that supermarkets transfer ‘excessive risks and unexpected costs’ onto their suppliers. For instance they can order a set quantity of goods from a supplier and at the time of delivery can cancel part or all of the order without compensation. This affects both our own local farmers and Fairtrade and other overseas suppliers, and can drive them to the verge of bankruptcy.

MPs from all three main political parties support the introduction of a supermarkets watchdog, or Groceries Code Adjudicator (GCA), and a parliamentary bill has been drafted and scrutinised, but for lack of parliamentary time it has gone no further. A Groceries Supply Code of Practice was set up in 2012 but has no teeth.

We are asked to write to our MPs asking them to urge the inclusion of the bill in the next Queen’s Speech, and for the GCA to have the power to fine supermarkets who break the code and to launch investigations based on any credible evidence, including from third parties.

At the Campaigning Day we were encouraged to write a ‘poem’ for inclusion in a Valentine’s Day card to out MP on the subject; ours follows!

As I am sure you know the Winchester MP is Steve Brine and you can write to him at The House of Commons, London SW1A 0AA. 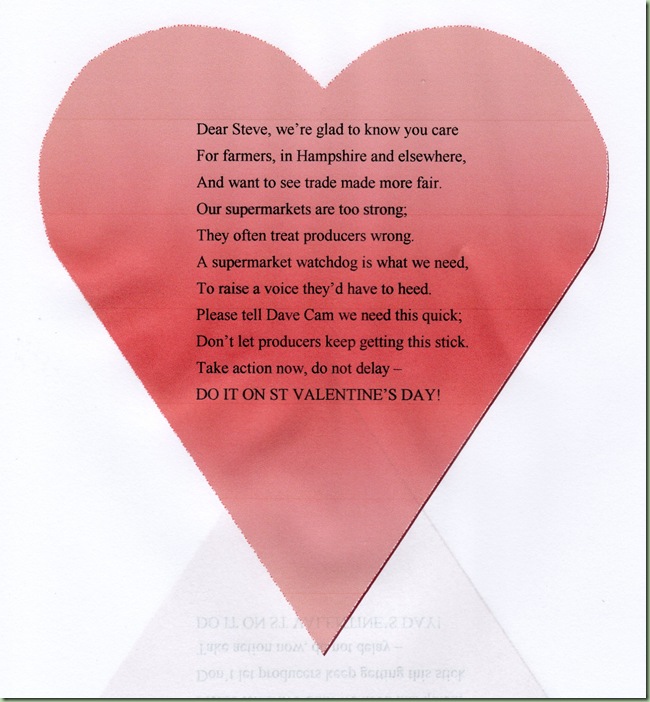