The talk by Rosemary Dunhill and David Lloyd at the AGM on 21 November 2011 was about a holiday, which took place in November 2010. It was one of a series of trips arranged by Traidcraft with the overall title of ‘Meet the People’ Tours. It covered a relatively small area in what is a large country, five times the size of the UK, but the area visited had many of the contrasts of the country – between densely populated and sparsely populated, temperate and very hot, fertile and desert, first world and third world. Huge problems of poverty and inequality remain, many the legacy of the apartheid years, but we saw how Fairtrade, along with government and other initiatives, were slo 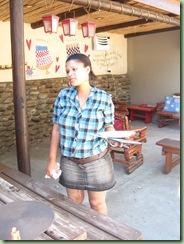 We visited Fairhills, a very extensive Fairtrade wine-making co-operative with 22 participating farms, where the members have a major role in decision-making. The wine can be purchased at Sainsbury’s and the Co-op; the Co-op is a major customer and benefactor. We visited the outlet of their craft co-operative, set up to help the women to develop another income stream, and the café, where our waitress told us of the transformation Fairtrade had brought to their lives. Day care centres, youth clubs, sporting facilities, health care and much more have been provided from the Fairtade premium with additional help from the Co-op – and back in England we discovered that Fairhills sponsors Big Issue sellers both in South Africa and here! 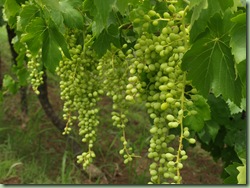 Further north, in the outskirts of the Kalahari desert, we visited the Eksteenskuil Agricultural Co-operative, where the primary product is raisin grapes used by Traidcraft in geobars, muesli and other products. Our guide had been brought up in Pretoria, moving to this very hot and poor area after marrying a black farmer as soon as the law permitted. The Fairtrade premium has enabled the scattered farms to be connected to the electricity grid. The co-operative has also purchased a pool of tools and equipment for hire by the farmers.

In an area with 80% unemployment we were shown a rose geranium essential oils plant recently set up by the government on the banks of the Orange River. And we were entertained by a wonderful group of Nama (bushman) dancers, using this means not only to bring in a small income but also to preserve and share their culture and language, almost stamped out in the apartheid years. 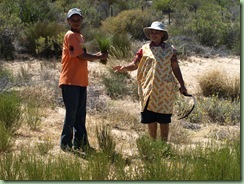 At the Heiveld Co-operative, near Nieuwoudtville in Namaqualand, made up of 63 small scale farms, we saw a rooibos tea plantation and met some ladies who had diversified this with building a small group of traditional huts as guesthouses. The Fairtrade premium has enabled the farmers to develop their business, particularly business initiatives for women, and support local schools and transport.

Further south again we visited Beautifulgate, an orphanage for children with HIV/Aids which had expanded to provide a community development programme for young people in this very deprived area. This is a non-governmental organisation with some funding from government and various trusts; it also runs a child sponsorship scheme. And we were taken to Kaya Mandi, a township largely comprising shacks with again high levels of poverty and unemployment but a strong community spirit. We visited a school and were given lunch in a ‘homestead’. It is clearly on a sort of alternative tourist route, and so forms another way in which some income is being brought into an area of very great need. 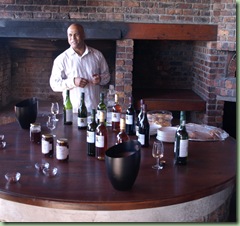 Two more Fairtrade visits concluded our tour. Koopmanskloof was our second winery, and here members of the co-operative had shares not only in the farming business but also in the winery itself. The wine is exported to several European countries and also to America and China, and can be bought from Traidcraft. Rainbow Fruits is a much smaller operation, providing employment for a small group of previously disadvantaged women in preparing and cutting dried fruit, which again can be bought through Traidcraft., The workers are all shareholders.

The tour was what it said – an opportunity to meet the people – and we felt we gained a lot of insight from seeing these different models of Fairtrade in operation.