During fairtrade fortnight this year we again had our banner hung over the High Street for the first week. 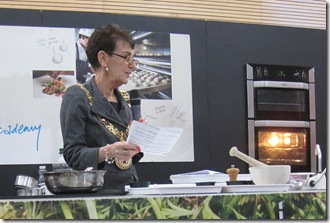 The main event of the fortnight was a ‘Fairtrade and Local’ dinner organised by event management students of the University. The event was attended by the Mayor, Cllr Angela Clear; the speaker was Greg Valerio. It also included a cookery demonstration by Andrew McKenzie of Lainston House, and a tasting of Fairtrade wine.

The other main event during the fortnight was the Big Brew held at St Mark’s church, Oliver’s Battery