Our AGM this year took place on 23 October, during One World Week, a most appropriate time to be thinking of the needs of the developing world and the strong links between us. We had been considering during the year the advantages of working more closely with other groups with related aims, so we were delighted to be invited to hold the meeting in the Milner Hall, in co-operation with St Peter’s Justice and Peace group. This partnership worked really well, and we had a great evening.

Our AGM had an attendance of 18. The Chairman’s report outlining last year’s activities and out thoughts for the future follows this account. The Treasurer reported present resources of £513, some of which will be used to help more schools achieve Fairtrade status. The present officers and committee members were re-elected, with an appeal for anyone who might be interested in joining the committee to contact the Chairman.

Many of us were unaware that there is quite a considerable Filipino community in Winchester, most of them worshiping at the Roman Catholic churches of St Peter’s and St Stephen’s and many of them working in the health service. After the business meeting they provided a magnificent spread (modestly described as a finger buffet) of Filipino food, and we then had an illustrated talk from Agnes Sitjar on employment and family life issues for Filipinos both in the UK and in the Philippines. She described a hard-working, trust-worthy and resilient people in a country which is over-populated, with high unemployment and subject to natural calamities. It is the only predominantly Christian country in South East Asia, with 90% of the population Christian. There are now 200,000 Filipinos in the UK; they are economic migrants, not asylum seekers. Many were invited and indeed urged to come to fill vacancies in our hospitals and elsewhere, but they have faced many problems from illegal recruiters landing them in abusive and exploitative working conditions, and (sadly) from the antagonism of work colleagues. It was to address these issues that the Filipino Association of Central Hampshire was set up to promote social cohesion and integration with the wider community. There are very strong family links between the countries, and their not very large salaries are generally stretched in order to send money back to relatives in the Philippines.

Representatives of the Soroptomists also joined us; they have taken over from one of our previous committee members the selling of bags made from recycled juice cartons picked up from rubbish heaps by women’s groups in the Philippines, and they brought a fine selection of products with them. We were pleased to hear that they sold bags to the value of £88. 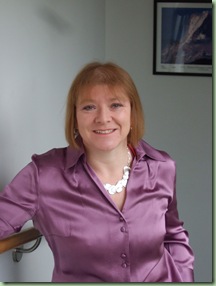 After Agnes’s talk we had an interesting talk by Becca Rowlands, the South East representative on the Fairtrade National Campaigner Committee. She spoke on Making Food Fair, linking the issues we seek to address through the Fairtrade movement with issues at home and the advantages of bringing producers and consumers closer together. There are huge numbers of producers and huge numbers of consumers, but ever-smaller numbers of traders and retailers as the big supermarket chains get more and more powerful, and this makes contact between them more difficult, and can lead to producers both here and abroad being intolerably squeezed. Fairtrade Fortnight next year will run from 24 February to 9 March and the emphasis will be on bananas. A third of all bananas sold in this country are now fairtrade, which is wonderful, but the non-fairtrade producers are getting a very raw deal and the aim will be to improve this.