A talk by Andy and Hannah Mintram at the AGM of Winchester City Fairtrade Network, 25 October 2012 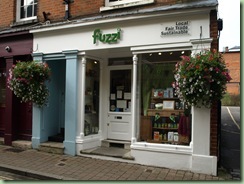 Andy and Hannah Mintam opened their shop Fuzzi in Parchment Street a year ago – the first stage in the fulfilment of their vision to set up and run an ethical business from which they would plough the profits back into the community. Initially they ran a series of market stalls selling fairly traded and eco-friendly goods but eventually were able to take and stock the Parchment Street shop through personal loans from friends. They aim to break even, including the payment of a salary, and to use any surplus to aid community projects. Already they allow local groups to use the shop premises out of hours.

They stock food – organic and fairly traded wherever possible, and a range of gifts and clothing. They work with local producers, many of whom have not worked with a shop before because they cannot produce the required volume and regularity.

During their first year they have increased their food range, often acting on customer recommendation or requests. Not everything has worked; they tried selling fresh organic vegetables but didn’t yet have sufficient turnover for this to be sustainable. They now have some volunteer helpers which frees Hannah up to do some promoting outside the shop. It has been a difficult year to set up a new business but they certainly have the drive and determination to continue and succeed.

Asked why they had chosen the name Fuzzi, Hannah told us the whole idea gave her a ‘fuzzy feeling’ and made her feel happy inside. That feeling is shared by many visiting the shop and talking to this remarkable couple.