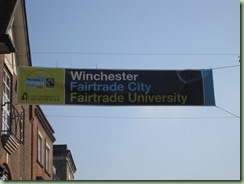 Fairtrade fortnight ran from 28 February to 13 March 2011 and during the first week we had our banner across the High Street. This proclaims that Winchester is a Fairtrade City and that the University is a Fairtrade University.

The two main events were the talk by Toby Quantrill on Wednesday, 9 March, and the Fairtrade Open Day at the Guildhall on Sunday, 13 March. 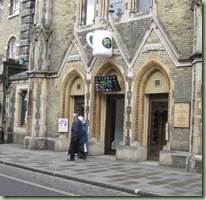 If you were walking up the High Street at lunchtime on the first Wednesday of the fortnight you may have been offered a fairtrade banana by ‘Fairtrade Fergus’ who was dressed in a gorilla suit. For some reason most people refused to take a banana from him! He was there with Andrew Rutter who was handing out programmes of what events were on during the fortnight. 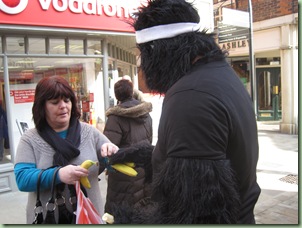 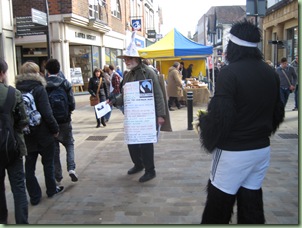 On Saturday, 5 March, Rosemary Dunhill and David Lloyd gave a talk in St Mark’s Church Hall, Oliver’s Battery, about their experiences meeting fairtrade producers in South Africa. On Tuesday, 8 March, there was the talk by Toby Quantrill which is reported elsewhere on this website, and on Thursday, 10 March, the Mayor of Winchester, Councillor 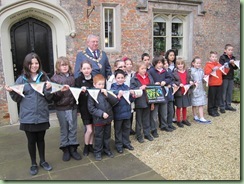 Richard Izard, welcomed schoolchildren from All Saints Primary School, Winchester, to Abbey House. The children surrounded the house with bunting made from fairtrade cotton as part of the national attempt to produce the longest stretch of bunting ever made. The bunting was decorated by the children from All Saints School. Westgate School, and Lanterns Nursery School, Winchester and from six other schools around Hampshire.

A very successful fortnight was rounded off in style with the Fairtrade Awareness Open Day which included a fashion show. The event was organised by students from the University and held in the Guildhall. Pictures of this are shown elsewhere on this website.

Click here to see the full programme of events as published in advance of the fortnight.