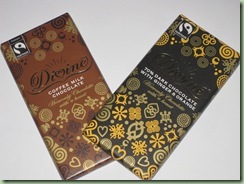 The talk was given before the deferred 2010 AGM. David has worked at Divine since 2005. Chocolate has been viewed as a treasure for many centuries. The Mayans and Aztecs used cocoa beans as currency.

Ten years ago the government of Ghana partially liberalised the cocoa industry, which had previously been entirely state controlled. In 1997 45,000 Ghanaian cocoa farmers formed a co-operative called Kuapa Kokoo and voted to start their own chocolate company. In 1998 Divine Chocolate Company was launched in the UK with the help of Twin Trading, the Body Shop, Christian Aid, and Comic Relief. Kuaka Kokoo owned a third of the company. In 2006 the Body Shop donated all their shares to Kuaka Kokoo, so the farmers now have a shareholding of 45%.

In choosing what chocolate to buy a good criterion is to go for the one where the highest proportion of the profits pass to the farmers, and this is certainly true of Divine. The farmers get the fairtrade price for their beans, plus the fairtrade premium, plus 2% of total turnover as producer support, plus their share of the profits. Board meetings alternate between London and Ghana.

He talked about chocolate tasting and how all the senses should be involved – appearance, touch, sound, aroma, mouth-feel, flavour and aftertaste. There are 1500 distinct flavour compounds in chocolate compared with about 300 in wine. You should always taste the lowest percentage cocoa chocolate before the higher ones.

The tree gives nothing for the first 4-5 years. It grows to the size of an apple tree. It has 30 years of productive life if you are lucky, but can live for 60 years. The pods grow directly on the tree and are the size of a small rugby ball. They are cut by hand using machetes and hooked knives. The pods have to be split open for the beans to be extracted. Each pod has about 40 beans, and there are about 40 pods to a tree. The beans are wrapped in plantain leaves and left to ferment over 5-8 days. They are then spread on large tables and dried in the sun for 5-12 days, reducing their moisture content from 60% to less than 8%; this is essential to prevent mould. They are then packed and transported to Europe – in fact to Germany, where Divine has a long-term contract with the company which makes the chocolate. When they were first set up no English company was prepared to do the work as they didn’t think Divine would succeed. The ‘cake’ left at the end of the chocolate making process is ground into drinking chocolate.

The co-operative now has its own scales. This is very important. Previously they were dependent on salesmen coming to buy from them with manipulated scales. Everything is well-managed and visible. In one small village there are five or six different religions but all work together. The Fairtrade Premium is paid at the end of the year and spent on the village, the villagers deciding what they want. One village chose to have a mill at cost of £2,500. Schools are absolutely key. Some issues arose about child labour, and it is difficult because it is natural for children to help their parents on small family farms – but this has been dealt with. Most of the villages have wells, many paid from the Fairtrade Premium, which benefits the whole community not just the Co-operative members.

20% of the world’s chocolate comes from Ghana, almost entirely from small family farms. 40% comes from the Ivory Coast which has huge estates. In Ghana chocolate also makes up 20%of the country’s foreign exchange and because this is so key to the economy the Government insists that they spray, so they cannot produce organic chocolate.

The Fairtrade Premium is set by the Fairtrade Labelling Organisation and at present is 200 dollars. At present the market price is higher than the Fairtrade price so the farmers get this – they get whichever is the higher.