Posted on March 20, 2010 by Jeannette Archdeacon 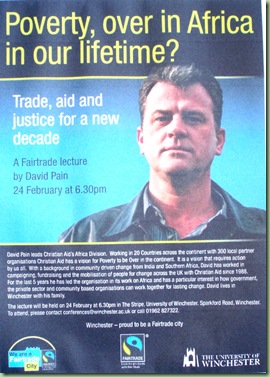 Fairtrade Fortnight 2010 was very successful. An excellent talk by David Pain of Christian Aid at the University and a Fairtrade Fashion Show at The Tower Arts Centre were both very well attended.

In his talk, David Pain said:

"Poverty is an outrage against humanity. It robs people of their dignity, freedom and hope. Poverty robs people of power over their own lives," David Pain, leader of Christian Aid’s Africa division, said in opening his lecture at the University of Winchester on Wednesday 24 February.

Mr Pain was giving his lecture on the ending of poverty in Africa to an audience of more than 80 people as one of the highlights of the city’s celebration of Fairtrade Fortnight. His lecture was sponsored by the University of Winchester – a registered fairtrade university – and the Winchester City Fairtrade network. Professor Joy Carter, Vice-Chancellor of the university, and John Beveridge, Chairman of the city’s Fairtrade Network, welcomed Mr Pain to the event.

In the experience of Christian Aid, Mr Pain said, poverty was caused by unequal power relations. Men and women in the developing world had to take personal power, economic power, political power and social power in their own societies if poverty were to be ended.

Poverty, he emphasised, was about power: it was political. "The ending of poverty required political will of the order that was applied to the abolition of slavery, the ending of apartheid – and dare we say it, the rescuing of the global banking system." Only people could change politics and challenge poverty.

He saw three opportunities that needed to be worked on in the ending of poverty: trade justice, climate justice and accountable governance.

For the past three decades the global economy had been managed from within the mindset of the so-called "Washington Consensus". Policies such as deregulation, privatisation, low corporate taxation and the wholesale liberalisation of trade and financial markets had been the norm.

We had lived with the myth, the comfortable myth, that economic growth would eventually benefit everyone. We had believed, despite ever-growing environmental and financial evidence to the contrary, that our model was sustainable. "But we know now that our financial systems and assumptions of growth are deeply unsustainable."

Mr Pain ended by saying: "The three opportunities for trade justice, climate justice and accountable governance are not easy options – but they are the essence of a transformation that could lead to the ending of poverty in Africa."

He told his listeners: "If we are to respond positively to these opportunities, we need your voice to be added to the process of change, your influence as a consumer, your action as a campaigner, your power as a voter to be added to the movement that will end poverty."