Fairtrade in the United States of America 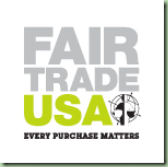 Winchester City Fairtrade Network hosted a talk given at the United Church on 20 May 2009 by Charles and Sarah Hirom, of the Gosport Fairtrade Group.  It was great to see several members of our church in the audience for this very interesting talk, which was followed by a lively discussion.

In Autumn 2008 Charles and Sarah visited California with a primary view of visiting friends and seeing natural sights.  They travelled along the mountain spine of the Sierra Nevada and back south along the coast, finding out about Fair Trade along the way.

At Mendocino on the coast they found the Thanksgiving Coffee Company – advertising slogan ‘Not just a cup but a just cup’.  Their product was Nicaraguan coffee initially imported via Canada, and the initial aim was to help the impoverished people of Nicaragua during the trade embargo by the US.  In 2006 they produced Uganda Delicious Peace Coffee, from a cooperative set up by Jewish, Muslim and Christian villagers to work harmoniously together.  Thanksgiving Coffee works in partnership with other groups, packaging their coffee for various niche markets, eg Gorilla Fund Coffee; they have also worked to get round the embargo with Cuba.

Transfair USA was founded by Paul Rice in 1998 as a certifying agency for fair trade coffee in the US, guaranteeing a minimum floor-price for farmers.  While most members of the international Fairtrade Labelling Organisation now use the general Fairtrade logo, Canada and the US have retained their own logos.  In both countries fair trade was initially limited to a single product, but Transfair USA has now expanded to cover tea, chocolate, rice, sugar, bananas, flowers and wine.  Fair trade has become one of the fastest growing segments of the food industry in the US.  In 2007 Starbucks’ conversion to Fairtrade doubled the amount of Fairtrade coffee imported into the US.  In 2008 they started certifying wine from Argentina, Chile and South Africa.  By the end of 2009 they expect to be certifying all product types now available in Europe.

Instead of a Fairtrade Fortnight in the US they have a Fair Trade Month in October, usually concentrating on a particular product, such as flowers.

Whereas the Fairtrade Foundation was set up by a number of charities, the Transfair Board consists of business people, but they are now getting more involved with other groups.  They have recently appointed a member of staff to work on the Fairtrade towns movement.  Ten Fair Trade Towns in the US have so far declared, using the same five goals as in UK, as yet without a central certificating body.