Fairtrade Fortnight is always a great time to remember and remind others of the needs of producers in the developing world and to support them by choosing to buy items with the Fairtrade Mark. Several events took place in Winchester – our Fairtrade City.

To launch Fairtrade Fortnight, St Mary’s Twyford held Snowdrop Saturday on 24 February. Parishioners (and others) were invited to add to the carpet of snowdrops in the churchyard. Fairtrade coffee and refreshments were served in the church rooms and all donations went to Christian Aid.

On Tuesday 27 February the Mayor of Winchester, Councillor David McLean, was ‘at home’ at Abbey House in the Broadway. Visitors were given a tour of this historic house and relaxed with Fairtrade tea and cakes. There was also the chance to win a hamper filled with Fairtrade goods. The raffle proceeds and donations went to the Mayor’s charities.

St Mark’s Church Oliver’s Battery planned to hold its annual Big Brew on Saturday 3 March in support of Traidcraft Exchange, but heavy snow led to its postponement to 24 March – 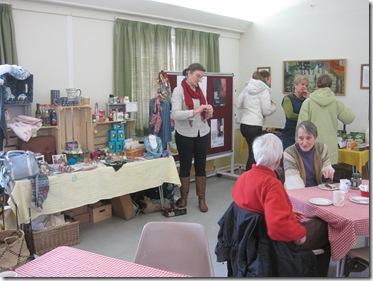 outside the Fortnight but we still count it! As always this was well supported, with tea, coffee and home-made cakes in addition to a Fairtrade stall, as well as a Fairtrade-themed quiz. The range of goods on sale was greater than previously as Christchurch parish contributed a stall of non-food items which proved very popular. This reflected closer links between the two parishes, as well as a greatly welcomed increase in Fairtrade involvement at Christchurch. Lanterns School held a Fairtrade cake sale on 6 March, and on the afternoon of Saturday 10 March there was a Fairtrade event at the Pastoral Centre at St Peter’s Church, again with stalls and refreshments.

The highlight of the Fortnight was held at the United Church in Jewry St, Winchester on Monday 5 March, when a large group came for an evening talk, Fairtrade for Palestinian Farmers. Originally we had planned this for last year, but there were difficulties over visas and health, and the event had to be cancelled at the last minute. 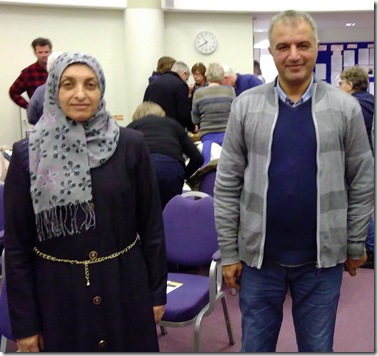 This year we were delighted to welcome back Taysir Arbasi, a representative of Zaytoun, the Palestinian company which imports Fairtrade olive oil and other products to this country; he had first visited us in 2012. With him was Bassema Barahmeh, farmer, Board member of Palestine Fairtrade Association, a village council member and mother of four! They gave us a fascinating presentation, with Taysir translating for Bassema and time for questions and discussion. The Zaytoun products we bought in to sell flew off the table, and we all enjoyed sharing Fairtrade refreshments, including Palestinian bread dipped in Zaytoun Fairtrade olive oil . Thanks to the United Church World Action Group who hosted the evening.

Churches with ‘regular’ stalls selling Fairtrade food and other items during the Fortnight included Christchurch, the United Church, and St Luke’s. And our Fairtrade University ran its own programme of events, including two days when Fairtrade breakfasts were served in the canteen, and the general public were encouraged to call in on their way to work.

All in all a very well supported Fairtrade Fortnight. Let us know of any events you wish to help with for next year – 25 February to 10 March 2019.