During Fairtrade fortnight this year we had a most inspiring talk from Greg Valerio about fairtrade gold; we had an information stall in St Maurice’s Covert in the High Street; and St Mark’s church staged a ‘Big Brew’

The best gold story in the world

One of the highpoints of this year’s Fairtrade Fortnight was our annual lecture at the University of Winchester on 25 February. We were delighted to have as our speaker Greg Valerio. Greg works as an activist in the jewellery and mining sector, with a background in human rights and environmental advocacy. Essentially expelled from school with no qualifications, he became appalled at working conditions and poverty in the developing world. He began to develop and sell fairly traded jewellery, but discovered that while the work on the raw materials may have been carried out ethically, it was almost impossible to trace reliable information about the source of the materials. When he eventually managed to visit small mining operations in India and Africa he was appalled at the conditions he found there – pollution, child labour, criminality, exploitation, dangerous working conditions and more. Some mines were run entirely on bonded slave labour. 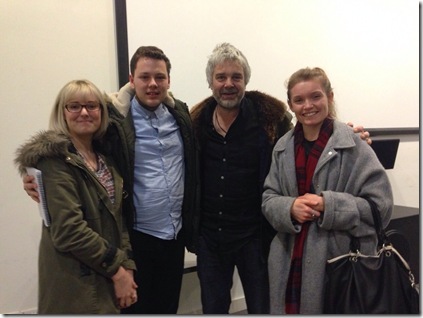 Small artisanal mining is estimated to be the biggest employer of labour on the planet after agriculture, with 150 million across the world earning less than two dollars a day.

Eventually he was able to work with others on the development of ethical gold mining in Colombia – so-called oro verde or green gold. He co-founded the Alliance for Responsible Mining and was one of the principal architects of certified Fairtrade Gold, now vigorously promoted by the Fairtrade Foundation. Fairtrade Gold supports artisanal and small-scale miners to improve working conditions, eliminate child labour and reduce the harmful impacts of mercury. The ‘I do’ campaign aims for 50,000 couples to exchange Fairtrade rings at their weddings, and the Foundation’s ultimate aim is for every Fairtrade town to have at least one jeweller selling Fairtrade gold items.

Greg was winner of the Observer Campaigner of the Year accolade in 2013 and his book, Making Trouble, outlines his struggle.

Information stall at the Covert

For the second year we marked the Fortnight by providing a Fairtrade information stall in St Maurice’s Covert on Winchester High Street from 10.00 to 2.00 on Wednesday 4 March. We had a display of Fairtrade goods and gave out leaflets, bananas and teabags! We were cheered by the large numbers who told us they already buy Fairtrade. We concluded that the Covert is probably the coldest location in Winchester, forming essentially a wind-tunnel, and our new pop-up banner proved impracticable (but it did receive its first airing at Greg Valerio’s talk). We were grateful for support from Sainsbury’s and Tesco’s, and as always from the University of Winchester. There was also a good view of the banner over the High Street, erected for the second week of the Fortnight.

We know that Fairtrade Fortnight was marked in other ways through our city. Traidcraft has continued to promote Big Brew events and one example was held at St Mark’s Church, Oliver’s Battery. Last year there was the additional excitement of a last-minute broadcast about Fairtrade by BBC Solent, but even without this there was strong support, with tea/coffee and home-made cakes on entrance, and stalls, information and a quiz in addition.