This year’s Fairtrade Fortnight has been one of the most active since Winchester first gained Fairtrade City status in 2008.

Again we had our banner displayed across the High Street, this year for the second week of the Fortnight. 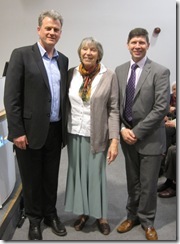 Our annual lecture in partnership with the University of Winchester was given by David Pain, Director, Supporter and Community Partnerships, Christian Aid, with the title Beyond charity: transforming business, ending poverty. He cited the example of the 10-year-old Dalit girl in northern India, among the 400 million in that country living in poverty despite a booming economy, excluded from other than basic education, health care, and the prospect of decent employment. He emphasised that such poverty can only be tackled by putting those living in poverty at the forefront of bringing about change.

He summarised the contribution which the Fairtrade movement has made over the last 20 years since the introduction of the Fairtrade mark; the mark now appears on over 4,000 items and sales in 2012 exceeded £1.6 billion. In the same year the Fairtrade premium delivered £23 million towards better education, health care and infrastructure. The movement also provided the groundswell for campaigning on other important changes in global trade and a growing recognition that countries must have the right to protect and support their vulnerable farmers and industries.

It was clear however that Fairtrade was only part of the solution to the problem of poverty. In the next 20 years he expected to see more opportunities through personal investment, pension funds etc to invest in businesses which are good news for people in poverty, so-called pro-poor market development. Christian Aid was already involved in this, working in partnership with civil society organisations with deep roots and connections with people living in poverty, and engaging with such market actors as governments and smallholder associations. He quoted examples from Nicaragua, Kenya, and Sierra Leone.

More could be done through partnerships involving business communities in the developed world. Corporate Responsibility Programmes are now an element of very many businesses, and these make a practical difference for poor communities, but not the sort of change to transform the situation. What is needed was a change in the way business is carried out. There are some encouraging signs. Business leaders are now asking questions about the social and environmental impacts of their business and ‘shared value’. There are concerns about global supply chains, transparency and accountability, tax justice. In a country like India there is scope for affirmative action by businesses to ensure that more socially excluded groups could be employed in future. Progress is coming, albeit slowly, through partnerships between government, the business sector, and civil society, but most critically those who live in poverty must become the actors and agents for change. 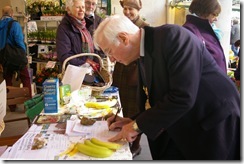 Winchester City Council allowed us the use of St Maurice’s covert adjoining the High Street to mount an information stall on 28 February. We displayed a large range of Fairtrade food items, all available locally, and a range of Fairtrade-related leaflets. We were grateful to Tesco’s for providing some free items, and to Sainsbury’s for a tray-full of Fairtrade bananas, which we distributed to passers-by, urging them at the same time to sign the Fairtrade Foundation’s petition against the unrealistically low price of bananas which is making the work of those farmers not benefitting from Fairtrade increasingly unsustainable. We collected over 100 signatures and a lot of interest (and surprise!) was shown. We were delighted to be visited by the Mayor and Mayoress… 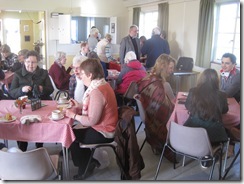 For the third year running the parish of St Luke with St Mark organised a coffee and cake morning at St Mark’s as part of Traidcraft’s Big Brew programme. In addition to the refreshments there was a cake stall and a craft stall, as well as a stall of Traidcraft goods, which are also sold monthly in each church.

What made this event unlike those of previous years was a call from Radio Solent during the previous week to say they would like to broadcast part of their Saturday morning programme from the event, including a series of interviews about the importance of Fairtrade. Whether the news spread about or whether the appearance of the Radio Solent van on the Battery with its mast extended encouraged people in, the church heaved with people and nearly £400 was raised for Traidcraft.

A coffee morning and cake sale was organised at Lanterns, a Fairtrade nursery school. Parents were asked to provide cakes containing at least one Fairtrade ingredient. £45 was raised for the Centre and there was much talk about and interest in Fairtrade. 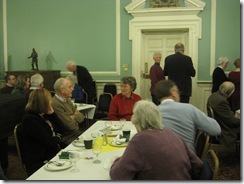 With Shrove Tuesday falling within Fairtrade Fortnight, Fairtrade-supporting pancake lovers had a choice of location, and a number went from one to the other. The United Church regularly organises a Pancake Bake on Shrove Tuesday, and a stream of satisfied customers kept the cooks busy. The cathedral event had a strong Fairtrade context with a Traidcraft stall, where over £100-worth of goods were sold, and a short talk on Fairtrade.

Two groups of students studying the Events Management course organised projects concerning Fairtrade. One group visited two primary schools, including in our area St Bede’s, which at this time had been relocated because of the floods. They spent the day working with several classes about Fairtrade and finding a lot of interest. One of the team was able to speak about their experience on the Radio Solent broadcast from St Mark’s above. The school is now giving serious consideration to applying for Fairtrade School status. The other group organised an event with a Fairtrade theme at the Student Union. More generally there was a series of tastings, meal options etc within the University.